Movies always leave a deep impact on the audiences, and so does the onscreen performers. At times, the impact is so huge that some fans tend to dedicate everything to their heroes and heroines with an intent to impress them. For them, the movie releases of their stars are no less than landmarks. These highly influenced individuals often go that extra mile in proving their worth to their idols. Their icons may or may not notice these bizarre acts; however, that does not really matter for these frenzied minds. Here are some such wacky incidents:

Amitabh Bachchan is a name synonymous with age groups from eight to eighty. There are innumerable tales of fan acts related to AB, however the one that stands out is that of a temple built for him in Kolkata. Here the fans have treasured the shoes he wore in Agneepath and kept it on the chair he sits on in Aks and sing praises of the superstar with a customised aarti. The walls are inscribed with the words ‘Jai Shri Amitabh’ as is the saffron cloth that the pujari wraps himself in. 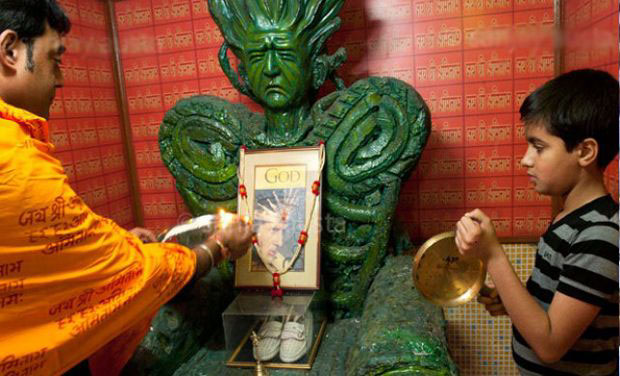 Rajnikanth is an icon in the Tamil film industry. A die-hard fan of Rajni believed the rumours that his idol was suffering from kidney complications, and therefore took an overdose of sleeping pills in order to end his life! The 40-year-old fan named Rajniraja Arockiasamy attempted suicide to donate his own kidneys for his beloved star!

41 year old Lucknow-based Vishal Singh has more than 22,000 pictures of Shahrukh Khan; every inch of his house is covered with the star’s film posters. There are SRK cut outs on the ceiling, the television, on cushions, his phone and even in his car. Vishal drove more than 1,300 kilometres with his wife to Mumbai to spend their honeymoon outside Mannat (Shahrukh’s house). In fact, Vishal is also known as Vishahrukh Khan, his daughter is named Simran and his little son is called Aryan.

Pappu Sardar, a food stall owner from Jamshedpur and a die-hard fan of Madhuri Dixit, hosted a lavish party for the actress’ 47th birthday with cake and it started with prayers and wishes and ended with dancing. He also donated pencils, copies and books to poor children. Decorations were done with lights, ribbons and balloons; many photographs of Dixit were on display. 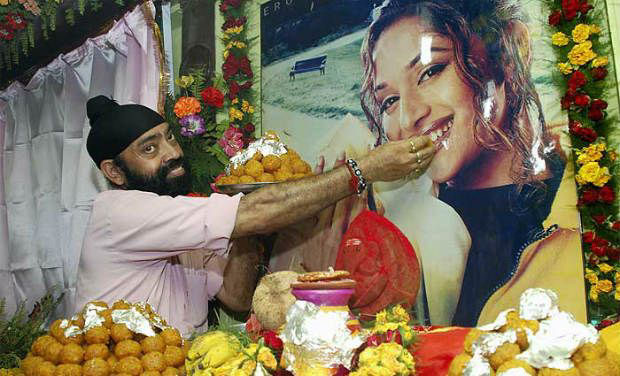 While in Dubai, Priyanka Chopra asked for feedback about her movie from one of her fans. The person went to the nearest theatre and booked a screen for the entire week and organised special screenings of PC’s latest for friends and family.

Mohit Jain, a 19 year old guy from Madhya Pradesh and a huge fan of Deepika Padukone, has specially created a website for Deepika as a gift to her. His creation iamdeepikapadukone.com is a one stop website for all fans of the actress. It has all the information about Deepika — right from her family to her career in Indian cinema. The website also has lesser seen childhood pictures of the actress.

Kishore Kumar cycled all the way from Ranchi to Mumbai, only to meet Aamir Khan! The skinny man met the actor and showed him handwritten letters from the people who he met on the way and helped him reach his destination. 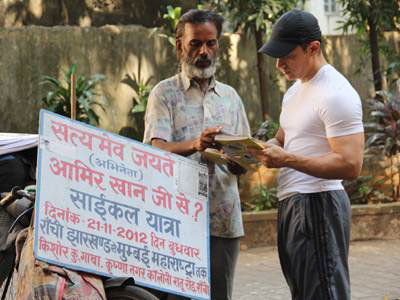 A 21-year old Akshay Kumar fan walked for 42 days from Haryana to Mumbai to meet his idol. He didn’t have any money or a place to stay in the city so he decided to stay outside the apartment complex gate to get a glimpse of the star. When Akshay got to know about this, he did meet him and gave him some money asking him to go back home.

20 year old Jyoti Vishwakarma from Kolkata has a permanent tattoo on her hand bearing Hrithik Roshan’s name as a testimony to her never-ending love for the actor. She was chosen via the show ‘Live My life’ to meet Hrithik. The actor gave her a surprise visit rendering her speechless for about 10 minutes.