Every war has a reason. The causes of wars include conquest, freedom or religion. The great emu war however had a very different motive behind it. This war took place in Australia between the natives and a grand flock of emus. Emu is not a code word here, but is actually a specie from the Aves class and is the second-largest flightless living bird in the world by height. 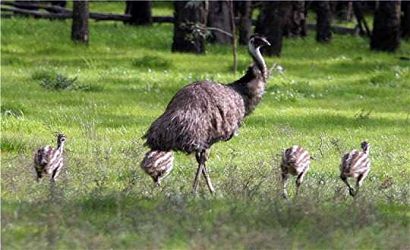 How Did The Emu War Start?

The battle started in 1932 when 20,000 emus decided to interfere in the daily activities of the farmers of Western Australia. Just after the Great Depression of 1929, the farmers tried to produce more in order to help revival of the economy but were failing without the essential government support. The problems for these farmers had just begun when such a large number of emus infiltrated into their lands. After the breeding season, the emus migrated to the inland regions from the coastal areas. 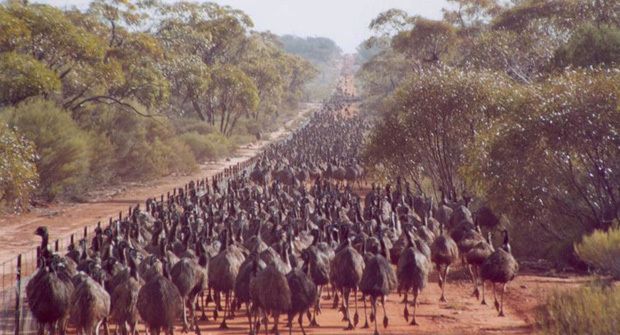 The Request For Help

Emus considered the farmlands to be comfortable residing areas with food and drinking water facilities. The influx of these birds on the farming areas proved to be fatal for the poor farmers. Emus destroyed the harvest and broke down the fences inviting the other animals for a feast on the crops.

Helpless farmers asked the government for help and the government deployed two ex-soldiers of World War 1 under the leadership of Major G.P.W. Meredith. The Minister of Defence, George Pearce accepted the request for deployment of machine guns. He was also of the view that shooting down these birds would be a good target practice for the soldiers. They were armed with two Lewis guns and were given 10,000 rounds of ammunition. They were to assist the farmers and collect emu skins so that the feathers could be worn by the horsemen. 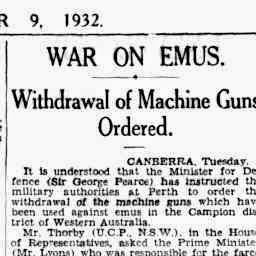 On 2nd of November, an attempt was made to curb the emu population. They tried targeting the emus but were unsuccessful as the emus gathered themselves in small flocks and ran for their lives. It became very difficult to stall and target them in a particular place. The first round of shots were futile but the next round was able to kill a few of them.

The next attempt was made on the 4th of November where a thousand of them were sighted but the jamming of the guns ended up in killing only a dozen of them. Later, the number of birds sighted in these areas became less and the Major decided to move south to find them. Meredith now revised his plan of action and placed the guns on a truck for better target but even this proved to be futile. By the 8th of November, 2,500 rounds of shots had been fired and around 500 emus were reported dead.

The Australian House of Representatives discussed the matter and a clear defeat was accepted by the Australians in the emu war. The crops continued to be destroyed. On 13th November 1932, the final showdown began where around 40 emus were killed. The team was recalled on 10th of December and 986 emus were reportedly killed with 9,860 rounds of ammunition. Assistance was asked for in the subsequent years but were turned down by the government. Conservationists protested against this operation and demanded the security of the emu race.