Sant Balbir Singh Seechewal, I googled the name to find him stated ‘eco activist’ as mentioned in Wikipedia, the first provided link. We were on our way to Seechewal village. There were lush green fields on both the sides but it wasn’t the case few years ago. “The fields which you see now on both the sides used to be barren and unproductive”, explained my teacher.

The trees beside the road garlanded the path making sunlight play a sneaky peeky game through leaves. The cool breeze gushing the hair and wed mud’s scent made it a perfect natural abode. Picturing the place as barren is beyond anyone’s imagination. ‘Were we really on planet earth was the question that kept hitting me. The houses, schools, community places and all buildings were painted orange signifying ‘Welcome to Seechewal’.

I found Seechewal extremely clean. It was more than just clean. There were well maintained drainage and sewers, concrete lanes, trees at every nook and corner. I was super impressed. The driver turned to even more cleaner, greener and super decorated lane which ended at the gate of ‘Nirmal Kuteya’, the orange building with many potted pillars and lamp posts.

Q: Why are there so many potted plants in Seechewal, I asked my teacher.

“Once all the ‘Kumhars’ of the village and the adjoining came to seek help on their lowered demand of pots and their dropping income. He asked them to make as many pots as they can and purchased them for the beautification of the region”, our teacher said. “All the vegetables and fruits you see are produced from organic manure made from domestic and cattle waste”, she added pointing at the trolley full of fresh fruits and veggies.

We were welcomed with a warm and kind smile by a dusky looking turbaned old man dressed in an orange robe. “Baba ji, har baar ki tarah fir bachon ko laaye hai aapke paas”, our teacher said as she greeted him with folded hands. “Bachon key  liye toh hamare paas waqt hi waqt hai. Hamara future hai yeh toh”, he petted one of the students back as we all greeted him. We assembled in a big hall with our teachers and Sant Balbir ji at the centre.

Before our teacher could say anything, he initiated, “Pucho bachon, kya janna chahte ho?”

Bachey, I didn’t do anything. It’s the outcome of the efforts of villagers. All I did was gather them. They had already suffered great losses because of infertile land. All they needed was a way to end their misery. Children of the village couldn’t go to school due to poor connectivity. People suffered in trade, ailing patients found hard to reach hospitals. We made a layout plan and executed on the same. That’s it, he said.

“We were doing well, didn’t really feel like. You know the obvious reasons.”

His smile and simplicity emanated positive and influencing divine vibes to which one could easily fall. The walls daunted the pictures of getting acknowledged for his great works from Dr. Kalam, SAARC environment award, his UNO’s invite to Copenhagen on climate change and many more. I was amazed at such a down to earth Godly figure embracing everyone with love, compelling me to unwrap his life. 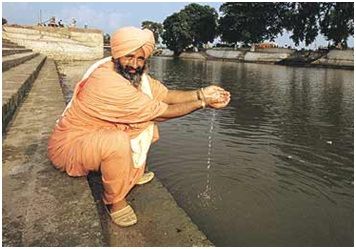 “Union Minister of Water Resources, River Development and Ganga Rejuvenation Uma Bharti would send a team of volunteers from 1,619 villages located on the banks of the Ganga to Sultanpur Lodhi to follow the model of public participation.” This was the news report of The Tribune. Eye opening result of bringing Kali Bein (the holy rivulet of great significance in Sikhism) back to life became an exemplary model for Govt. to follow in rejuvenating the Ganges.

Q: Baba ji, how did you do this miracle? It’s like bringing someone back to life, asked another.

(Chuckles) It wasn’t any miracle. But yes, you can still call it.We called Kar Sewa (service) and the number of people who showed up to save the holy river surprised me. We started with cleaning of Hyacinth which had engulfed whole rivulet in year 2000 then removed the silt which was the contribution of untreated effluents of six towns and forty villages with industrial waste and pollutants from factories upstream. I timely motivated sangat (followers) with religious metaphors and it helped them stay organized, co-operate, and stay focused.

Q: I’ve heard the number of people were in thousands. How did you manage to control such a big crowd?

“I time and again instructed them to be united and stay upfront for the holy cause. Gurbanihas given great emphasis to every element that binds us to life and its beings and the verses kept them focused. They gathered to do service; service to nature. Why would I control them?” said babaji.

Q: After cleaning of the river, what were the after effects?

Effects were tremendous. The rejuvenation of Kali Bein, rejuvenated the lives of people. It restored the water flow in hectares of land and reclaimed from water logging in Hoshiarpur areas. Before Kapurthala was hit by desertification and Mand from floods in confluence of Beas and Satluj rivers. It greatly recharged ground water level, saving farmers from committing suicides.

Q: Apart from being an environmentalist, you are also active in uprooting cruelty on women, poverty, illiteracy by coming up with schools and colleges to empower the oppressed. Can you tell us something about that.

I try my best to do maximum for the benefit of all. I’m not limiting myself to constructing roads, organic living, cleaning river; I propagate the importance of sports and for the same we have made sports stadium where national as well as international competitions are held. Our youth has being engulfed by drugs giving them slow death. Sports give them the very reason to be spirited, lively and view life with optimism, he said.

In the short excursion, we also visited their college where various vocational courses were being held and most importantly their community radio, Avtar Radio FM 90.4 from where they give solution to various local environment issues and help farmers and villagers lead eco friendly lifestyle.

Many national and international organizations have showered honours on him for his achievements in different fields of environmental up gradation and public welfare. Internationally renowned magazine Time has acclaimed Sant Balbir Singh Seechewal as “Hero of Environment”. He is the only Indian and only Asian to get this honour. Indian media (including Jalandhar Doordarshan, Dainik Jagran, Punjab Kesari, DainikBhaskar and many other groups of newspapers) have also felicitated him with their prestigious awards.

The President of India bestowed on him “Nirmal Gram Puraskar” for his distinguished work as the Sarpanch (Head) of his village Seechewal. Punjab Govt. honoured him with the State Award. Punjab Pollution Control Board has also honoured him for his outstanding work in the field of environment.For his charitable activities, All India Pingalwara Society honoured him with “BhagatPuran Singh Award”. The Buddhist religious leader Dalai Lama also honoured him at Dharmshala.

I blinked hard looking at those pious eyes. My each and every cell in the body gave Sant Balbir Singh Seechewal a standing ovation for going against bureaucracy and system for a noble cause to serve mother earth and her beings. He’s indeed a man with GUTS!