Social Anxiety And Its Many Avatars

Do you know of someone who is around you but hasn’t had a conversation with you for a long time? Is there someone who is a fabulous personality but also prefers to be left alone most of the time?  Does it strike to you that the desire to be left alone could be a symptom of social anxiety? What is social anxiety? How can you identify it? Here are few of the symptoms of Social Anxiety:

How to recognize Social Anxiety?

That can be true. But that is a very simplistic way of looking at social anxiety. You know people with social anxiety, but you don’t realise it. Don’t you have a friend who always seems to miss all your calls and texts you back ten minutes later apologizing for it? Do you feel they are happier to talk over sms than directly on phone? That friend of yours has a very specific form of social anxiety.

They hear the phone ringing and shove it under a pillow or a cushion until the phone stops ringing. They have elaborate plans to avoid phone calls. This is because phone calls make them panic. They are anti social in all possible ways. Such people prefer ordering a pizza online than going out and eating. They would shop online and choose every such option where human interaction can be avoided. 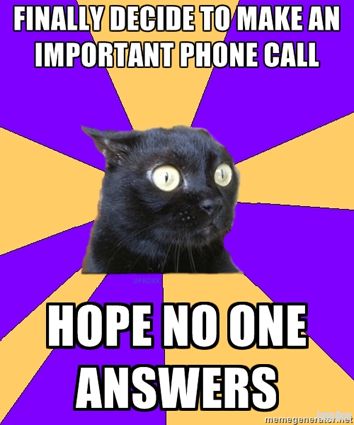 Think of a friend who never comes to any parties unless you drag them there but once they’re there, they sparkle at the centre of attention? That friend, too, probably has social anxiety. They just compensate a lot when they finally grit their teeth and make it through a social situation. They’ve spent their lives perfecting the art of hiding how close they are to hyperventilating.

You might also have a friend who always tells embarrassing and funny stories about themselves, and occasionally you, in social situations. The moment it seems like there might be a lull in the conversation, they bring it up and everybody is involved and talking again.

That friend has the kind of social anxiety where they are so terrified of awkward silence that they will fill it, no matter the cost.

What can be done?

You might not know that you or your friends have social anxiety. But I want you to know that it’s okay! So the next time when your friend avoids your calls multiple times, you know its because of their social anxiety. If they cancel on a party, it’s because the thought makes them breathe into a paper bag. All of their stupid jokes are to break the silence of the group. If they finally make an important call after stalling for three days and then mutter ‘don’t pick up, don’t pick up, don’t pick up’ as the phone rings, they’re not being funny.

Social anxiety is real. Sometimes, people who seem to have it all together, seem to love being the centre of attention and have no problems speaking up in a crowd but we need to dig deeper and check on the above symptoms. Offer help wherever and however it is possible. This is not a big ailment and this can surely be treated.