Ola Vs Uber: The New Age Cab War in India

Competition should never be taken lightly. No matter what your model is, someone out there will try to do it better. Whether they succeed or not is a different matter altogether. There is a perpetual war between Ola and Uber over cab fares, services, customers, and drivers. In this never-ending saga, let’s see how each company stocks up on different attributes.

Money In The Bag

Bhavish Aggarwal and Ankit Bhatti founded Ola in 2011. The company has raised USD 1.23 billion so far in 8 rounds of funding. Their main investors are SoftBank, Tiger Global, Matrix Partners and Sequoia Capital. Uber has been in the game since 2009. With beginnings in the USA, Uber entered the Indian market in 2013. Founded by Travis Kalanick and Garrett Camp, the company has raised over USD $8.71 billion. In 2015, the Tata Opportunities Fund invested USD $100,000 million. As recently as last month, Saudi Arabia’s Public Investment fund added USD $3.5 billion to their money pool. 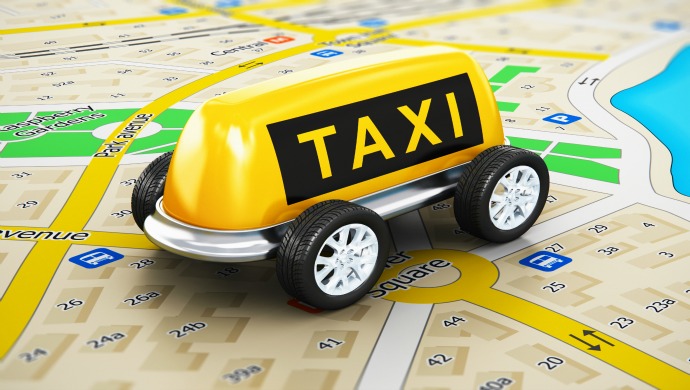 A company’s success is based on the customers’ experience. With the tendency to put every good or bad experience on social media, it is easy to see where each company stands.

The difference between Ola and Uber is Uber’s experience in other markets. The app that both companies use is quite similar. Both allow users to pay in cash, which is great for the Indian market. However, Uber has perfected the app interface. The app has a sleek monochrome design. Uber’s maps work much better as compared to Ola, based on multiple user experiences. Ola has faced consistent problems with maps, with regards to pick up and drop off locations. For a company that thrives on helping a person get from Place A to place B, this becomes a huge impediment. The Ola app sometimes crashes on users, leaving them with a bad experience. 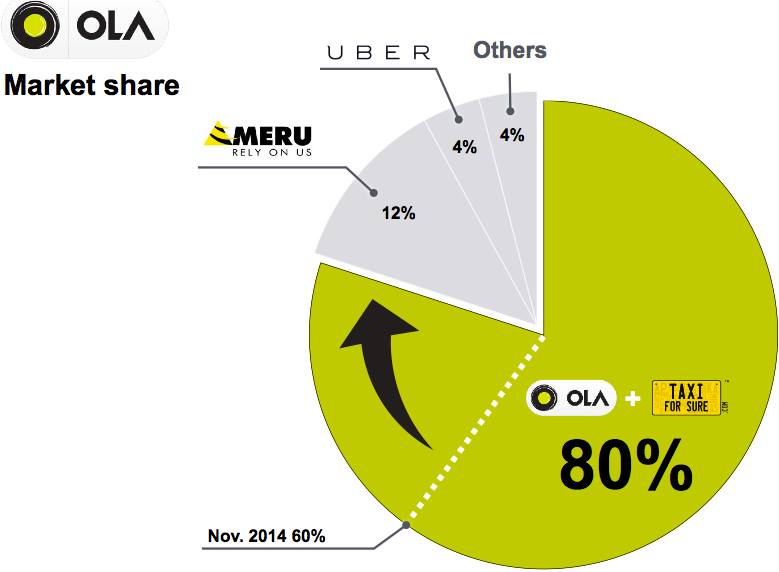 Responsiveness to customer complaints is also important. Ola and Uber, both have been known to be quite receptive to customer complaints. Uber takes the lead when responding quickly to resolve issues. Ola’s acquisition of TaxiForSure has increased the market share. The pre-booking feature offered by Ola is a huge advantage. But when you look at it practically, the pre-booking feature has caused inconvenience to a large number of users.

What Does The Market Say

In order to compare prices, we calculated the fares for both Ola and Uber, from Chatrapati Shivaji International Airport, Mumbai to Palladium Mall in Lower Parel. 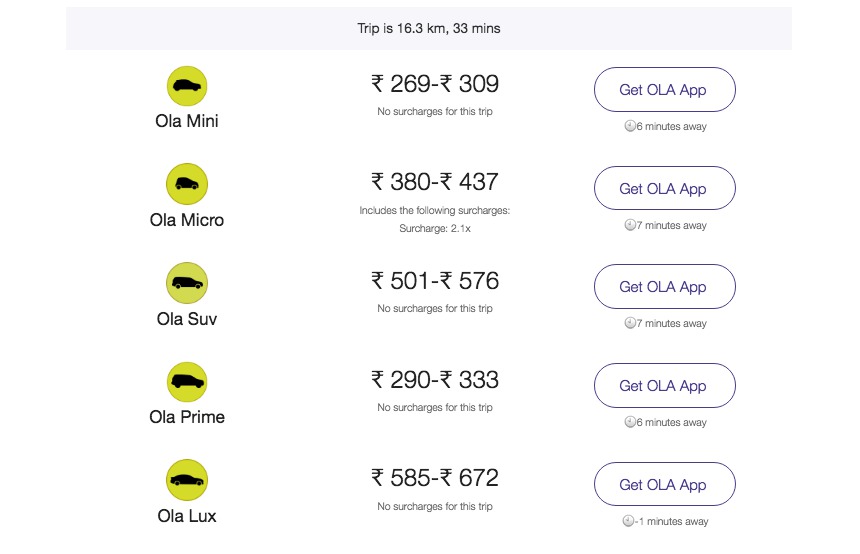 The first thing to see is the number of services each company offers. Each service costs differently based on the difference in base fare and other applicable charges. Uber is slightly cheaper than Ola. Uber has been known to be cheaper during off-peak hours consistently across cities.

The Woes of Surge Pricing

And then there is surge pricing, a headache for everyone who has ever used either Ola or Uber. The official explanation about surge pricing is that the fare multiplier means fewer taxis are available to customers for that location at that point in time therefore high demand of the cabs causes a surge in pricing.

Without any rational given for the surge, customers feel cheated. Both companies use an algorithm to calculate the surge prices. But who monitors this algorithm and who controls it? The lack of transparency seems to infuriate customers to no end.

There is a silver lining to all this. Governments in Karnataka and Maharashtra have set limits on fares. This ensures that the playing field is even for other public transportation providers. Additionally, Delhi has implemented its own set of rules as well which ban surge pricing. The Central Government’s directives about ride sharing services and public opinion on surge pricing seem to have had some effect on both Ola and Uber’s pricing policies.

Uber is confident that they will eventually overtake Ola in terms of market share. However, it remains to be seen who will be the ultimate market leader.

Ola No More An Interesting Startup