There was a time when Raju Kaku (Rajenath Kaku) was the talk of the town. Nobody could resist his crispy puris or the golden aromatic potato curry served alongwith the puris.  The shop was high in demand. The jalebis beckoned customers like flies. It would never fail to be full during mealtimes on any day of the week.

Raju kaku brought me up since childhood. Right from the time when I was a little boy, I had wondered about my parents whereabouts. But having found no answers, I gave up on my query. By repeatedly asking about my parents, I did not want to make Kaku feel that I am unhappy with him because I was not. Infact I was very happy with him. He was all the family that I ever had. His presence never made me miss my parents.

We shared many happy years together in the small shop. Location outside the Dakshineshawar temple in Kolkata, people always flocked in after offering their prayers to God. Most of the devotees would be on fast and they would break their fast in our shop. They would treat themselves with our shop’s food as though it was a prasad sent by God.

We earned double income as I played my part in looking after the shoes of people who went bare foot to pray. We had even managed to forge special kinships with certain loyal customers who visited on a daily basis.

Raju Kaku had never expressed any opinion with regard to my education. Though I was attending a local school nearby, I was by far more interested in the lessons taught by Raju Kaku. Finally, one fine day, I let my school bag dive into holy ganges water and walked back to the shop excitedly. Kaku did not mind. He taught me lessons of his own – practical lessons like how to know when a jalebi was perfectly cooked.

I learnt the trick of the trait thoroughly and soon became the boy of all odd jobs around the shop. I would serve second helpings to customers and even clean the tables. One day we adopted a pet parrot. We hung the parrot’s cage right on the threshold of the shop to welcome our guests. Also, I felt by this increased customer satisfaction, I was giving back to Raju Kaku for all the that he had done for me. 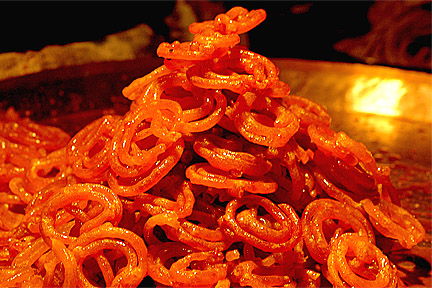 All was going fine until this day when the trouble began. A new Marwari businessman arrived in the neighbourhood with his shiny new shop right opposite to ours. “Modi and Sons” was an instant bestseller as people wanted to try a new food experience. I do not know whether it was their novel way of making puris that attracted guests or the fact that our humble offerings were simply not enough for the progressive man.

Money was becoming increasingly scarce and sometimes we even had to sleep empty stomach to keep the shop running. Kaku tried to compensate for this loss by selling packet chips but this idea was just greeted with further contempt from the devotees. Chips outside a temple! It was unheard of!

The day our parrot died of malnutrition, I spent the entire day outside on the porch brooding. It was uncertain that for how long could we keep the shop running. I could not stop cursing God during these moments of personal low. How could the God in the temple allow such a fate to befall us?

All throughout his life, Kaku’s faith in Him had not wavered: where had we gone wrong? That’s when I realized that the tattered pants I was wearing was once a school uniform. I felt an inexplicable sense of shame; it was something I could not explain. Even the smiling faces on the packets of crisps that hung from the counter seemed to mock at me.

That was the day I realized that what I really owed Raju Kaku was a better life than the one he led. I knew all that well-off families who came to us were educated, and I had let that opportunity to slip past me, like a fish in the water. I had made up my mind; It was better late than never. Tomorrow – come what may – I will go to school.