Some Bhagwad Gita Stories For A Positive Outlook Towards Life

Bhagvad Gita is, hands down, the most enriching book one can lay their hands on. We are not exaggerating when we tell you that it has the solution to all your problems. ALL. Some of you might not believe in the concept of Divine Power, or God; the Gita doesn’t force you to believe in it either. In fact, it tells you how to go about in life in a simple and humble manner and gain the most of out it. This time, we decided to share a few of our favourite inspirational Bhagwad Gita Stories. We hope this takes you a long way!

This is probably one of the most popular bhagwad gita stories which needs to be read again and again. Especially in today’s world when everyone wants to be the Jack of all trades, but Master of none.

One day, Guru Dronacharya organised a competition to test Pandavas and Kauravas princes. Across a stream he set up a small wooden bird on a tree. The bird was so small from where they were standing, but the boys were confident that they could pass the test. Yudhisthira, the oldest among them was called upon first. He crouched slightly and took his aim.

Drona spoke again ”Put your bow down and take you seat, you cannot hit the bird.” Yudhisthira silently walked back to his brothers, confused. Then, the next prince was called forward and Drona asked the same question to him again. He gave a similar answer, naming everything he could see. Once again, the boy was told to put down his bow. The same pattern continued with every boy that followed, until finally Drona reaching Arjuna.

Drona was very pleased with the answer. He glanced at other boys, who seemed to have learned the lesson. Finally he permitted Arjuna to shoot.
Arjuna shot at the eye of the wooden bird and the boys looked on in amazement at Arjuna. That was a perfect shot.
After a long pause, Dronacharya turned to the princes and said ”Now you see young princes, that is the power of concentration” 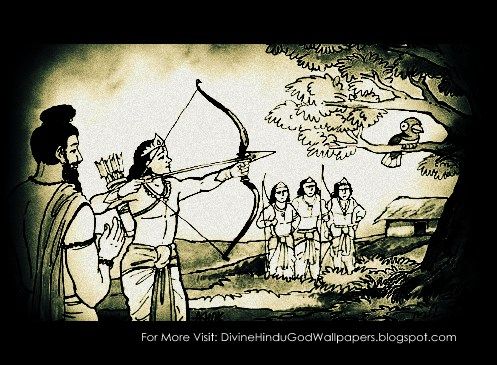 2. The Lake of Death

There is a thin line between Equality and Justice, these kind of Bhagwad Gita stories do a fine job in explaining the same.

Just after completing 12 years in exile, Pandavas were thinking where to spend rest 1 year incognito. While still in the forest, a sage met and asked them to see if they could possibly find the sticks, which he used to ignite his sacrificial fire and had somehow gotten entangled in the antlers of a deer. They could not find the deer, but in the woods, they become very thirsty. Yudhisthira instructed Nakula to climb a tree nearby and to locate any source of water nearby. Nakula did so and informed Yudhisthira that there was a lake not too far off.

Yudhisthira asked Nakula to go there and to fetch some water. Nakula located a beautiful lake, surrounded by trees, flowers and birds. He descended to the lake edge to drink some water to refresh himself. As he was about to do so, he heard a strong voice of warning ”My dear child, do not dare to touch that water. You must first answer my questions..” Nakula thought that he must be hearing things due to tiredness so he ignored the warning, drank the water and fell dead.

When Nakula didn’t return in a reasonable time then Yudhisthira instructed Sahdeva to take a look at what was delaying him. Sahdeva reached there and was shocked to see Nakula lying asleep. Before doing anything he thought, he could quench his thirst. He ignored the same warning, drank the water and died. Now, Arjuna reached there with Gandiva in his hand, suspecting some trouble there. He was stunned to see his brothers lying dead. He heard the same warning when he tried to quench his thirst. But, Arjuna challenged it to show himself and shot several arrows in the direction from which the voice came. He proceeded to drink the water and fell dead. Further, Bhima arrived there and met the same fate.

Now, Yudhisthira was very worried. He reached there and was stunned to see his dead brothers. He approached the water’s edge to fetch some water for the last rituals of his brothers. On reaching the edge, he was given the same warning. Yudhisthira rightly answered his questions and finally the voice turned out to be  Yaksha.

He asked Yudhisthira to name a brother whose life he wants to be restored. Yudhisthira asked Yaksha to give life to Nakula. Yaksha was very surprised as he was expecting names of Bhima or Arjuna who could be the chief supports of Pandavas in the war. Yaksha asked him the reason for naming Nakula. He replied that in himself Kunti still has one son but Madri had none. With a desire to behave equally towards his two mothers, he asked for the life of Nakula. Yaksha was very pleased with his answer and returned all of his brothers to life. 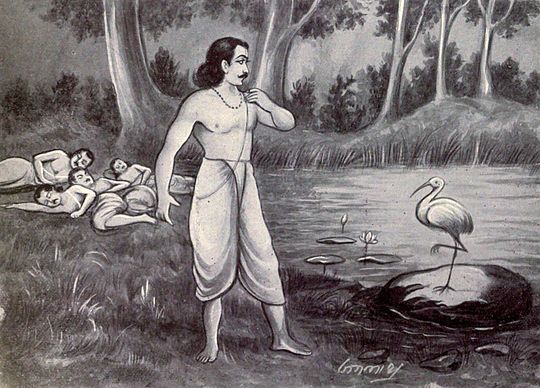 Being philanthropic is good, but being overly generous does more harm than good. Some Bhagwad Gita stories can teach this to you rather well. Lets read.

Once upon a time, there was a great Maharshi in a forest who always did penance. His tranquillity, helping nature and divine aroma used to attract the surrounding animals to gather around him, sit for some time and then leave the ashram. In a similar way, a dog also got captivated towards him and used to spend its time in the ashram.

One day, a Cheetah entered the ashram and upon finding the dog it fixed its gaze on it to devour him. Understanding this and scared to death, the dog ran towards the Maharshi for help. Feeling pity towards the dog, the Rishi transformed it into ferocious cheetah. Seeing this the other cheetah left the ashram with fear.

This made the Cheetah turned dog to roam around the forest without fear. As it started to enjoy its new body, a large tiger started to scare him. Crying, the dog went to the ashram, where the Rishi transformed it into a tiger. With its new power, the dog turned tiger started to scare other animals away from the ashram. Soon it became a habit that if it sees any animal bigger and scarier than itself, its original fear used to come back and then with the help of Rishi it got transformed further into a Lion, elephant and Sarabha (eight legged and many eyed animal).

This large exterior made its original faithfulness go away and it started to be cruel towards other animals and became carnivorous. It also got an evil thought that what if maharshi also helped other animals just like he helped it making them more powerful than it. So, it planned to kill the Rishi losing its previous good quality, faith. The Rishi, who understood the inner plan of the Sarabha, immediately turned it into its original form, the dog.

Saying this, Narada told to Dharma Raja, “Look Raja, this is why we should not encourage those who are not worthy. Before donating, we have to check if the other person is worthy of our donation or not. Even though all are good humans, we have to fix their positions and work based on their capacity and inborn qualities. A king should have patience, devotion and if his surrounding ministers have good attitude he can rule the whole world without fear.” 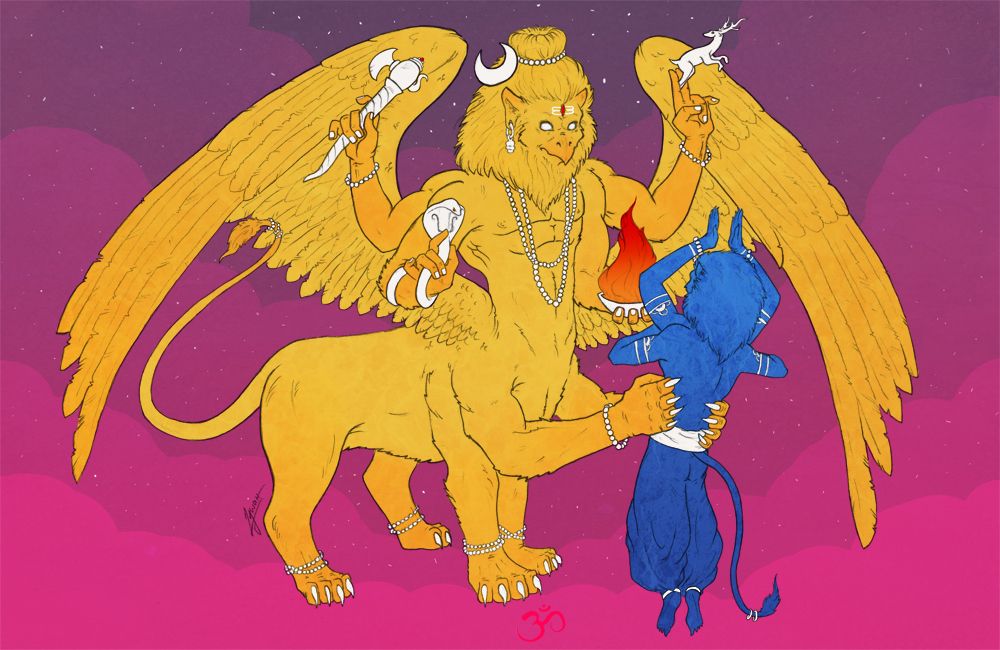 Ashwatthama who was angered by the sight of Duryodhana losing the battle. To avenge for the loss he abducted all of Draupadi’s children, took them to a secluded place and slaughtered them. Draupadi and others, who were sleeping in their camps after the war at night, didn’t notice this. A while later, Ashwatthama brought back the heads of the children and threw them before the Pandava camps. Upon discovering this, Arjuna and Krishna got so angry that set out to kill Ashwatthama and bring his head back to Draupadi and others who were crying heart-wrenchingly.

Arjuna hunted down Ashwatthama and brought him back alive to Draupadi. As Draupadi looked at Ashwatthama, everyone thought she would ask Arjuna to simply, behead him. But she didn’t. She asked him why he did it. Why he made her lose her children and her hope in this world. Then she told Krishna, “He is the son of Dhronacharya, the teacher of Pandavas and must be equally respected. That is Dharma. We can’t be the reason of his death.” Of course, Ashwatthama is a chiranjeevi by a boon (the one without death, just for this Yuga) and then, Arjuna cut his hair and stripped him of his clothes, banishing him in shame forever, making his boon his curse.

There is a treasure in Bhagwad Gita stories. Just grab one and start reading ASAP.