Being able to reach somebody halfway across the world instantly, on a device that is always with you would not have become possible without the advent of Whatsapp.

It has become easy to connect with loved ones across the world in just one tap because of whatsapp. The way smartphones replaced the earlier version of phones; whatsapp has replaced the traditional ways of messaging. Today whatsapp has become the most preferred means of instant and effective of communication. 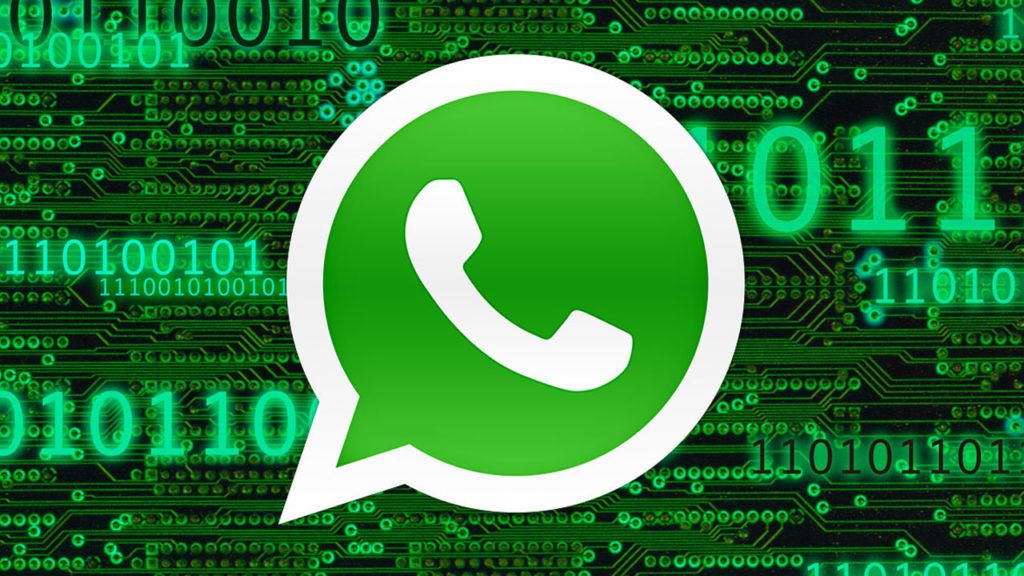 How did the app evolve? Who is behind it? How did he get the idea to launch such an app? Let us throw some light on the story of whatsapp, its founder and its evolution.

The mastermind behind the idea of instant messaging through an app is none other than Jan Koum. He was born in communist Ukraine in 1976. Jan Koum led a very simple life and was a firm believer of karma/good deeds.

Life for the Koum’s family was far from luxurious. It was simple with basic living conditions but surrounded by a constant fear of the secret police. Police had extensive invasive powers and were never reluctant to use them; especially among members of the Jewish community. Jan Koum’s parents rarely spoke on the phone in the fear that it might be getting tapped.

The family was under undue duress because of the secret police. The walls had ears and you couldn’t speak freely. 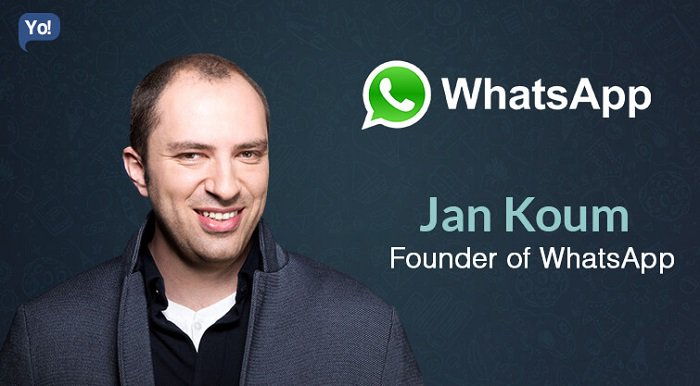 Jan Koum immigrated to the US in 1992 with his mother and grandmother. His mother took up babysitting to make ends meet. Unfortunately soon after, his mother was diagnosed with the deadly disease – cancer. They were forced to live off welfare and food stamps. He taught himself about computers by buying manuals from a local store; returning each one when he finished reading it. He didn’t have the money to buy a computer until the age of 19. They were too poor to afford phone calls back to his father in Ukraine. His father planned to join them in America but died in 1997 before seeing his family again. Grief didn’t leave Jan Koum, his mother’s ailment gave in and she too passed away in 2000.

How did the idea of launching Whatsapp evolve?

Jan Koum was going through extremely difficult and testing times after he lost both his parents. He was very angry and frustrated in the absence of having no proper means of communication then. The only way was through telephone which was both expensive and not secure. He was hopeful that that one day there would be a way for people from across the world to keep in touch with each other. This was the inception of the idea of developing an app for instant messaging and staying in touch with family members.

Koum’s struggle through his teenage

When Jan Koum was 18, he enrolled at San Jose State University. To pay for his studies, he started working with Ernst & Young as a security tester.  While working with them, Jan Koum had an opportunity to inspect the security levels of the company’s advertising system at the then booming search engine, Yahoo. At Yahoo, he met Brian Acton who was one of the earliest employees of Yahoo.  Six months later Koum also joined the team of Yahoo working as an infrastructure engineer, while still attending San Jose State University. Apparently, this arrangement was to last for just two weeks but Yahoo suffered a systems breakdown and Jan Koum was called for help. It was then that Jan had to decide between Yahoo or University. Ultimately, he chose Yahoo over university. 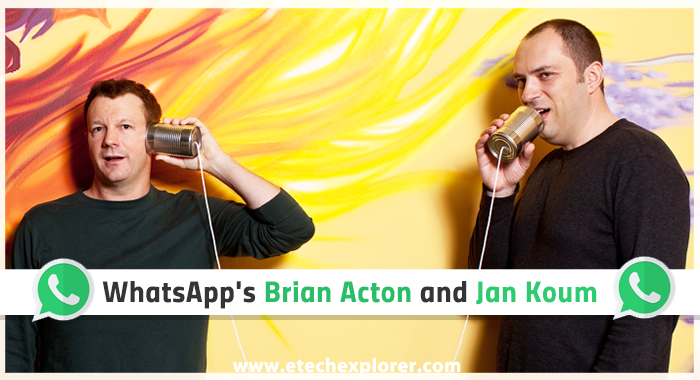 Koum and Acton worked with Yahoo for about 9 years. They developed a strong friendship and understanding during this period. Both of them worked with a common goal of creating a mark in the rapidly developing social media world.

In September 2007, Acton and Koum decided to leave Yahoo. They took a break for a year travelling across South America and studying about various websites. On their return to the US, they applied for a job at Facebook and Twitter. But, their applications were rejected. How could they be missed? The HR probably deserves a memo from Mark Zuckerberg for not selecting them.

Koum was surviving on his savings from Yahoo. In early 2009, Koum purchased his first iPhone and he visited one of the first App Stores open. He discovered that there was a new industry coming up for iphone compatible applications. It was at this point where Koum recalled his frustrations and his inability to contact his relatives. He decided to make an app of his own that would make this possible.

After making a start to this project, Jan convinced Brian Acton to join him as a co founder of the company. Their first and the most important management decision was that their app would never accept any advertising revenue. Also, they decided to name it after the text message we usually send – What’s up? That’s how Whatsapp got its name.

Their company’s first office was two cubicles in another company’s warehouse. They started growing organically without any marketing. Both worked together in getting funds to support their app and they succeeded in launching Whatsapp – through Apple’s recently opened App store. Initially it was decided that they would charge a token fee of one dollar annually to subscribe to their service. But later on it was decided to be kept free.

How did whatsapp replace all the other apps?

Whatsapp slowly replaced the traditional texting and SMS service. Unlike Skype and Yahoo, where one needs to have a user id and password to login, whatsapp allowed connectivity with just the phone number. The phone number was sufficient enough to connect with any person of choice. Also, the contacts having whatsapp in their phone would automatically get synced and show up with an icon in the contact list. This helped one to identify that the other person is using whatsapp and can be contacted easily.

Slowly, whatsapp also got the feature of sharing videos, photographs and every other type of media. The user database of whatsapp kept increasing day by day. Today, we can also make audio and video calls to people across the world. Five years later, Facebook purchased Whatsapp for $19 billion which was one of the biggest Silicon Valley acquisitions ever!! Whatsapp Founder Jan Koum signed the paperwork for the acquisition on the door of the office where he used to line up to collect welfare. 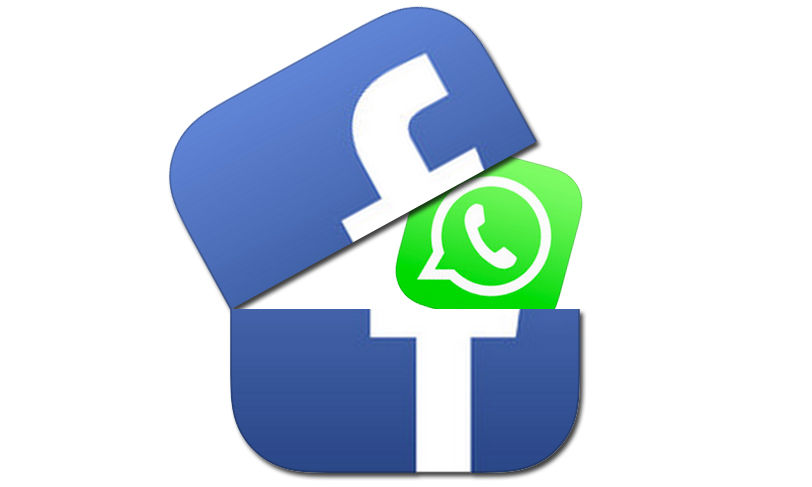 He now sits on Facebook’s board of directors. His net worth is an estimated $10 billion. Whatsapp has over 1 billion active daily users who send over 55 billion messages each day. He had fought to keep whatsapp free as a way for friends and families to communicate because he never had the chance to.

“We won’t stop until every single person on the planet has an affordable and reliable way to communicate with their friends and loved ones. “ – Jan Koum

Today Jan Koum is 41 years old, one of the wealthiest men in the social media industry, yet still looking back, in a positive light, on the simple life that he had in Ukraine and how his vision of instant simple messaging has changed the life of hundreds of millions.

With growing number of users day by day, Whatsapp has its own plans to monetize. It has successfully launched “Whatsapp for business” app. This app is specifically designed for businesses facilitating easy communication with customers and specialized tools.

They are working upon the “business chat” feature which allows the customers to communicate with businesses to get answers to questions, resolve issues, and complete transactions. Facebook’s other messaging app, Messenger, is trying to do something similar. Whatsapp is also working on developing tools where we can communicate with banks about our transactions, or inquire airlines about delayed flights. Till today, we get this information through text messages and phone calls.  It is now working towards making all this easier through whatsapp.

We all are hopeful and wish Whatsapp all the very best in all its future endeavours!!