Remember Mughals?  Yes, those kinds who we have to thank for Taj Mahal and Mughlai cuisine. No matter how romanticised they are now, back then, when Mughals still held the throne, not everyone liked them and by the time, they lost their throne, almost everyone disliked them.  Often times in life, there isn’t enough simplicity to our emotions. Hatred isn’t blind raging hatred and love isn’t cloyingly sweet. Every emotion is comprised of layers.

Accept it or not, human beings weren’t built for simplicity. Complexity is where our brilliance lies. It’s like that surge of feelings we experience when we see something that reminds us of the person we used to once love. Yes, they cheated on us and it was our own decision to break up, still it pricks a little. An angry parent too is never so blind to rage, that he forgets himself and his children. There is always an undercurrent of love behind feelings of rage and hatred.

But, that’s for individuals. Are we any different as a country?  Turns out, we aren’t.

Time for a history lesson

The Mughals came to India to conquer and conquer they did. What was but another “province” under their control, was a burnt village and thousands dead for the common people. Our very own prince charming, Shah Jahan, who is the gold standard for “lover”, was a slaughterer as well as ruler.

His charms included, forced conversions and temple demolitions. But, the sun sets on every Kingdom. The rise of Maratha’s and the growing unpopularity among their own subjects and the kingdom saw their decline. The advent of the East India company, put an entire stop to the dynasty and that’s how the Mughal empire breathed it’s last in this country.

Why can’t we stop loving the Mughals

Mughals left a lot behind for us. One thing, among everything else stands out as a thing of extreme delicacy, beauty and extravagance. Its sheer brilliance even blinds us to the dark deeds of the empire, to whom, it owes its origins, Taj Mahal, the seventh wonder of the world. 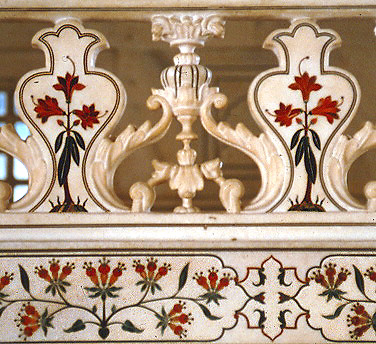 In the year 1643, it saw its completion. Built for love, the monument is famous for being the resting place of Shah Jahan’s favourite wife, Mumtaz Mahal, alongside her, also are buried the remains of the king himself. This monument of love draws millions of people to it every year, from all over the world.

When a thing of such magnificence stands on our own soil, how can we deny it love? How can the fact that, the commissioner of the marvel was a Mughal ruler, shadow over its beauty? Decidedly, it can’t and we love Taj Mahal, like our own and to such an extent, we have almost come to see Shah Jahan as a hero of sorts.

What makes Taj Mahal so beautiful?

The marble domes and the spires and the minarets, apart from being exquisite in themselves, also contribute greatly to the famed symmetry of the monument. When architectural brilliance of that kind is at work, Mughal or Maratha becomes almost a far fetched thing to think about.

Maybe that’s why, though the Mughals weren’t the most merciful rulers, we cannot seem to stop loving Taj Mahal anytime soon. Maybe its beauty has done something to take a few jagged edges off of the cruel memory of its origins.

One can only wonder, if we would be so forgiving towards Mughals if it wasn’t for the Taj Mahal. It’s an enemy long dead and gone but our wound from the colonial era is still fresh and bleeds at any slight friction. Who is to say, if it wasn’t for the ridiculously beautiful monument, we wouldn’t have borne them grudges?

All things serve a purpose, but things of surpassing beauty seem to serve purposes of greater kind. In any case, Taj Mahal isn’t an ordinary love struck madman’s folly. It’s a marvel that we love, almost unconditionally.