Her dollhouse was a miniature version of her perfect family. When papa went to work, she removed the papa doll out of the house and replaced him back after a few hours. Two years later, a new doll was added to the house: Baby Zaan. 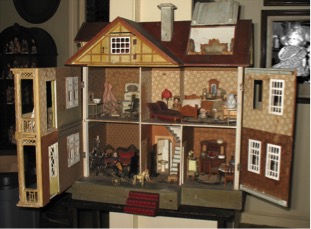 Gradually, she grew up and the dollhouse was lesser paid heed to. It was pushed to a dark corner in her room and lay forgotten as dust started accumulating on its roof. NCERT books and a hard disk full of sitcoms occupied her life now.

Four days after her boards got over, mumma asked her to come to the room. This was strange as mumma had been in a really bad mood lately. Zaan and she tried to steer clear of her mood swings as much as possible.

“Your papa and I are separating. He has decided to relocate to the States with his Ukrainian girlfriend. I’m sorry.”

She didn’t react. She couldn’t react. With a heavy head and not wanting to believe what she had just heard, she walked back to her room.

Her gaze travelled to the neglected corner of the room. It was the first time she had noticed the obvious cracks on the dollhouse.