Stereotyping Women Through The Ages

Talking about stereotyping women, a few weeks back I was reading ‘Jaya’ a book authored by Devdutt Pattanaik. It is such a wonderful book retelling the tale of all times – Mahabharata. While reading the book, a string of thoughts about women ran through my mind.

“A daughter is a prize in an archery contest. A mother asks her sons to share a wife. A husband lets another man make his wife pregnant. A wife blindfolds herself to share her husband’s blindness. A queen is forced to serve as a maid and a woman is publicly disrobed.”

While pondering about Mahabharata and the contradictions in it, my mind definitely wanders about and the train of thought leads straight to Ramayana. In Ramayana a king chooses to abandon his queen, for no fault of hers. This is the same queen who abandoned her life of comfort to follow her beloved husband. She was ok to leave behind everything even if it meant walking straight into the clutches of danger. A wife was forced to prove her purity in a trial by fire! A young maiden was given as gift in marriage to an old sage! An innocent woman was turned into stone for being raped by the ‘divine’!

While I was lost in these thoughts I was reminded about something else…  A day or two back, sitting in a café, waiting for a friend who never turns up on time, I overheard a conversation between a middle aged woman and a young girl of about twenty; who I assumed to be mother and daughter.

Mother:  Was it absolutely necessary for you to wear this short skirt and get out of the house?

Mother: Yes you keep ignoring my pleas but you’d understand my concerns if you were a mother.

Daughter: Mom I understand your concerns but you have to understand that my skirt will not entice a rapist any more than a saree clad woman will. It is not the clothes, it is the thought, the evil intention.

Mother: No matter how much you try and convince me, the society at large will not hear your voice and this is the society you will have to live in. They will question your morals and your upbringing… do you want me to feel humiliated because of your actions? 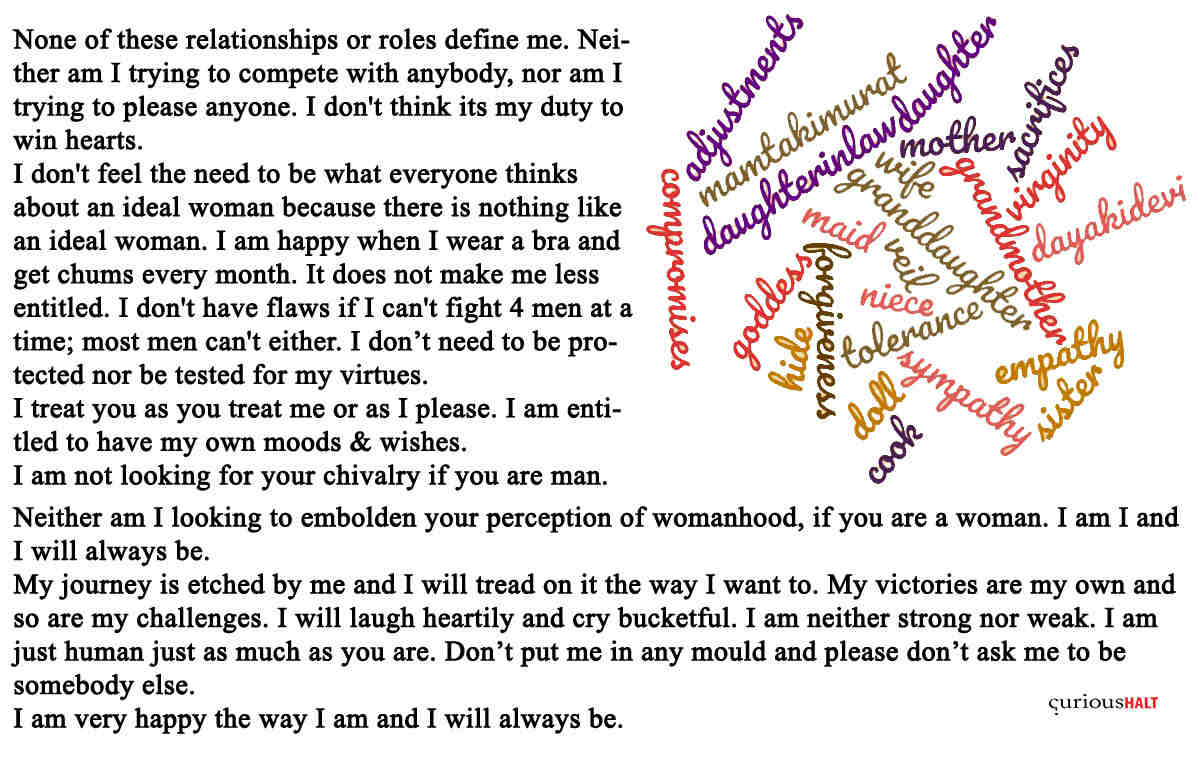 In every age and every place around the world, great philosophers and thinkers of the time have pondered over the nature and complexities of the feminine disposition. Some have praised their beauty while some have talked about the virtue of purity and chastity inherent in every woman. Some have placed women high above, right next to God Himself while some have preferred to treat them as slaves and walk over them as if they were doormats. Everyone has been stereotyping women but women are not Gods! Women cannot be trapped in a cage of righteousness and morality. And women are not anything but women, still fighting the same battles.