Short Story: Was It Worth A Life?

As he looked deeply into her green eyes, all his tensions regarding a mother who became prey to lung cancer, and an abusive father vanished. He ruffled her flaming red hair and kissed the top of her head gently. He then held her tightly, protecting her from the cold wind which threatened to harm the union.
All was fine until she decided to go and befriend his enemy. She clarified that they were just friends. Was a movie date worth calling her a “slut”?

He did apologize but those green eyes wouldn’t look at him in the same way as before. They seemed to have grown cold like the winds and uncaring. 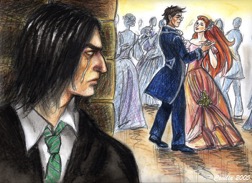 One fine morning the enemy turned to become a friend and friend appeared like an enemy. She was happy and in labour. She gave birth to his beautiful baby boy. He looked like him. His cries would make them miss a heart beat. But, their happiness was short-lived.

On this bright morning, they decided to drive through the countryside. Their spirits were high and roads were empty. When they speed soared suddenly on a sharp turn the car overturned! They met with a car accident which claimed their lives. The little boy however survives.
…
In the morgue, holding her dead, unmoving body, he looks at those rosebud lips for the very last time and kissed them gently. He was overcome by remorse and grief, and would give anything to be with her now.

No, it was never worth calling her anything other than beautiful, which she was, even beyond her last breath. But, he had the little boy now, the only living memory of her and one more time the enemy became a friend.