Poornima was fed up. She was just completely and utterly fed up. She loved her son Arun, she really did, but sometimes, she wondered what on earth had possessed her to imagine that she could handle raising a child. The scene in front of her made this one of those moments.

When The Child Brings Dirt and Litter Home

The eight-year-old apple of her eye was sitting on the good living room carpet. That wouldn’t be a problem, of course. But he was, currently, covered in a mixture of substances so horrid that she wondered if he’d fallen in a sewer. The reek indicated a mixture of sewage water, cow dung and the dirtiest mud he could possibly have found. Every item of clothing he had on – and that, since it had been school day, included his nicest dress shirt, his good blazer and his expensive school shoes – were entirely saturated in the muck that seemed to have become part of her first born. 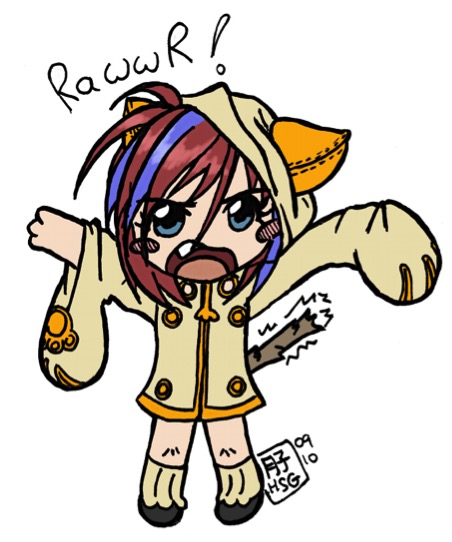 It’s an approximation, but yes – more or less this.

Three Puppies Are Equal To An Entire Evening At Risk

As if that wasn’t enough, he was holding not one, not two, but three wiggling little puppies, also covered in the same muck, and had now broken down in wails and tears at the idea that he couldn’t keep them all.

Since the wails were accompanied by frantic flailing, the pristine living room sofa – pristine because they were expecting Pravin’s boss and his family for dinner that evening – was now covered in increasingly large flecks of the most disgusting concoction of dirty things in the world. 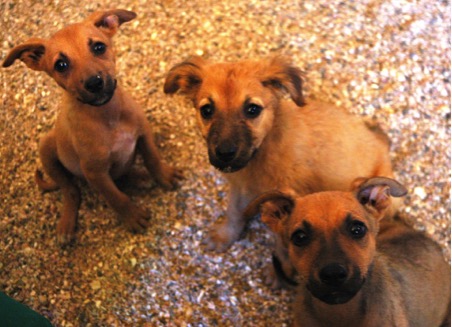 The day had started so well. For once, Poornima was completely on schedule getting everything absolutely perfect for the dinner party. She had looked up recipes, tried them out to rave reviews, and had all the ingredients prepped and ready. One hour in the kitchen and everything would be perfect.

The morning had got even better when she stepped on the bathroom scale. She’d been trying to get rid of the last three stubborn kilos of baby weight for seven years now, ever since Arun was born. She’d finally got rid of one! When she got to the kitchen, she’d had another surprise. Coffee was ready and waiting because Pravin had decided to go to the gym early. She had leafed through Arun’s maths book and seen that homework for the day after was done neatly. Poornima should’ve known at that point that it would only be downhill from there.

Arun hadn’t fussed at breakfast, even if it was his much-despised brown bread. He’d had his milk without complaining, too. She got her half-day off at work easily since her boss was in an extremely amicable mood that day. She’d narrowly escaped having a bird poop on her when it went splat on her colleague, whom she disliked, standing next to her. She shouldn’t have laughed, even inwardly. This was karma catching up.

Then there’s the fact that Arun was getting his prize in recitation at school. Heaven knew they’d gone through multiple world wars trying to get him to learn those twenty lines, but he’d managed, and done well enough to win second prize. Good lord, where was the trophy? Ah, there it was, crashing into her good vase and breaking it after Arun threw it in a fit of tantrum.

Poornima rolled up her sleeves. Enough was enough.

“Arun Chakraborty! You get up, take those three mutts and get into the shower right now. I’ll be there in two minutes. If I hear a peep from any of you, I will make sure you regret it for the rest of your lives.”

He knew when she meant business. Scooping up the three wriggling puppies, he trooped off, trailing stench and sewage behind him.

Poornima took a deep breath and buried her face in her hands for one minute.

Alright. She could handle this. It was just one room. She could clean that up in twenty minutes, disinfect it. She could just dump her son and his puppies in the bath and do that while they splashed and made a mess of the second bathroom. Oh no. She didn’t tell them to use the upstairs bathroom. That’s what you think. 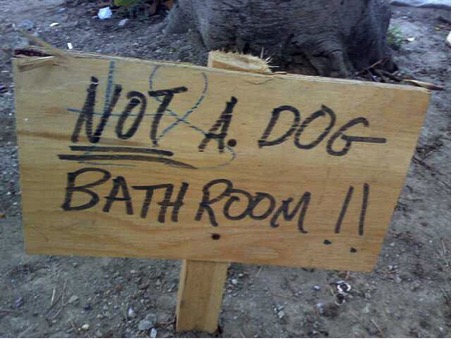 It was late indeed

By the time Poornima dashed over, the downstairs bathroom was a complete mess that no guest could ever be allowed to see. She almost broke down and cried, but there was no time for that. Fine – this was already a mess. She might as well get them all clean here and then clean the bathroom.

Like a competent mother she stripped Arun and dumped him in the bathtub. She dumped the puppies too right behind him, held each under the warm water, cleaned them up and dried them. Five minute per puppy, another five minutes for her son whose ears she dearly wanted to clip now.

In 20 frantic minutes, everybody was clean. She got them all out, wrapped Arun in a towel and took them to his room. She took everything necessary and chewable from the floor and put them up on the shelf. 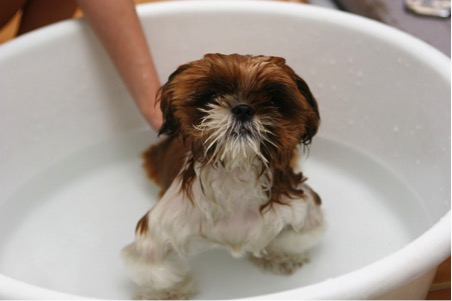 Adds a unique fragrance, too!

“Now, you have to keep them here for half an hour, okay? We’ll talk about this later. You have to make sure they don’t get into trouble. This is your responsibility.”
It was difficult to get the words out through clenched teeth, but she managed.

“Mamma, they need milk. Can you get me milk? We’ll all have milk.”

Poornima just managed to keep from tearing her hair out by the roots, and said, “Yes, I will get you all milk in half an hour. Just stay there.”

Was the turmoil over?

It took 40 minutes, not half an hour, to clean up the living room and the bathroom, after which she needed to clean herself up, and fix dinner. By then, cries of “Mammmmaaaaa, miiiiiiiilk!” were coming through the closed door. Not since he started walking had he voluntarily asked for milk, and now he was screaming for it.

She ran to the kitchen, half-dressed, grab three bowls and a glass and a carton of milk. Wait – puppies weren’t supposed to have cow’s milk, were they? Fine, yoghurt and bread, then. She skidded to a stop in front of Arun’s room, opened the door cautiously to have two puppies make a break for freedom. Of course, Arun and the third puppy chased after them, and there, the vase she’d replaced the original vase with was also in about 300 pieces. 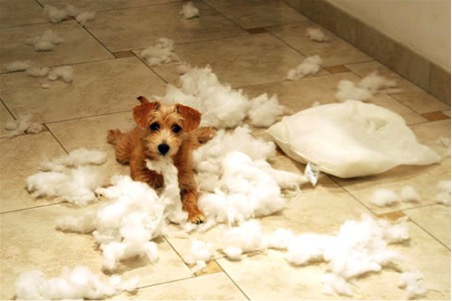 She managed to grab two puppies while Arun grabbed the third. She put all four little devils in the room again, hunted out an empty carton and an old t-shirt and dumped all three puppies in there.

“You are not supposed to take them out now. I don’t care what happens. You leave them there, do you hear me? If you don’t, I’ll take another carton out, put you in it, put a stamp on it and mail you to Timbuctoo.”

That stopped the demands for a moment.

“We’ll talk about this later, tomorrow. The puppies can stay for tonight. This is a decision daddy and I have to make together. Now, you will stay here and behave when I’m in the kitchen. Do you hear me?”

Arun a reflection of his mother

Poornima kicked into Supermom mode in the kitchen, doing six things at a time and putting her starters together, then shoving the main course in the oven, setting the timer. She called the bakery and reminded them to deliver the dessert. Thereafter she mixed a pitcher of margaritas because Pravin’s boss had a special preference for them.

She diced, she minced, and tossed her salad. She checked on her darling first born devil who was determined to ruin her life. But she was a mom. Moms do everything. She wondered how on earth her mom had managed all of that. 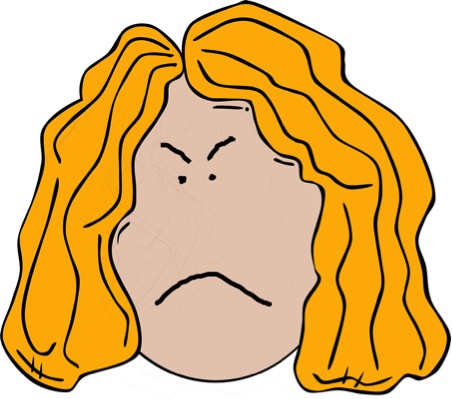 Meanwhile, Arun drew a lifelike picture of his Mamma.

No, she had once brought home a goat and two kids instead, and demanded that she keep them. In her room. Hmm, maybe her son did come by his ways genetically. She really needed to check if Pravin had done anything that should tell them what more to expect, thought Poornima as she cut her finger instead of a cherry tomato. Without missing a beat, she fixed the band-aid on it and got right back to doing everything at once.

She even managed the ten minutes she needed to not look like she had rescued the evening from the brink of disaster.

By eight, when everybody was scheduled to come, she was ready and waiting, perfect hostess’s smile in place. That’s when she dug her mobile phone out of her bag and saw 17 missed calls. Oh no – it was Pravin! She called him back immediately.

“Hello! Poorni, why did you take any of my calls? What’s wrong with the landline? I’ve been trying to call on that for ages, too!”

“Never mind, I’ll fill you in later. Long story. Are you all almost here?”

“Honey, that’s what I was calling about. A family emergency came up, the boss and his family have flown out of town. They asked if we can do this some other time and asked me to apologise to you.”

Poornima cut the call wordlessly, leaned on the wall, slid down to sit on the floor and just thumped her head on the wall.

“Mammmaaaa, I gave puppies your lemonade and they’re acting funny!” came the shout. 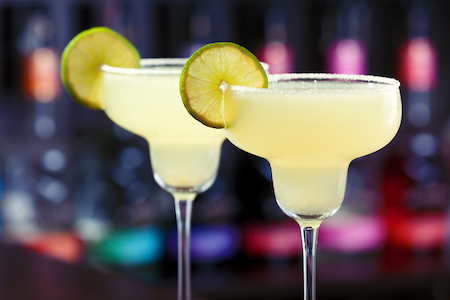 The Mythical Margarita that is not in Poornima’s immediate future or maybe not.