Short Story – Love Jihad Can Have Sad Endings Too

Ten resounding slaps and a hundred another bruises later, she somehow gathered herself together and got up. The cuts in her thighs pained. She endured this every day of her life, but what other option did Rashmi have? Love Jihad was in news and that had given her the motivation to elope with her boyfriend from college. He promised to take care of her and love her unconditionally. She was naive and believed him. Religion posed as a barrier in their love story.

Rashmi hailed from a lower middle class family in Aligarh. While Wasim was an orphan who had learnt life the hard way. Within six months of falling in love with each other they decided to get married. Ofcourse Rashmi’s parents objected to the choice and like all love stories, this couple also decided to elope and get married.

One dawn she packed her bare essentials and fled to Lucknow alongwith Wasim. They got married and soon Allah gifted them with Jamal and Javed. All was going fine until Wasim got addicted to alcohol. In a span of three weeks the house was empty from all its pittance savings and what followed soon was the first taste of domestic violence.

Episodes of torture lead to something courageous

Rashmi sat down to roll chapattis. Javed was crying. Wasim was out to get drunk with his friends. She didn’t have the energy to get up and deal with her crying son. She looked at the huge bruise on her left hand. It was bleeding. Something inside her stirred that day. The sight of her own blood was a common sight for her these days. But those two tiny droplets made her realise that she didn’t have to endure an abusive husband and an inhuman life. 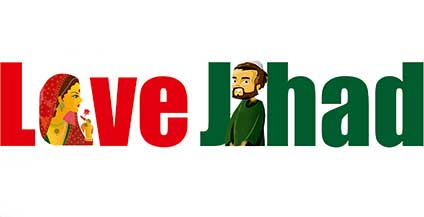 She got up opened a oddly stored bag and took out a mangalsutra which she had bought but never worn. Rashmi kept it hidden and a secret hoping some day Wasim would adopt to her Hindu past and let her wear the mangalsutra. But the day had never come. Love Jihad didn’t really help her much. Rushing through the quick memories of past she was brought back to present and a sense of courage set in to change the situation.

Love Jihad had to die.. will it?

The new found bravery gave her the confidence that she could escape. She took each step with great determination and opened the latch of the main door , however just then the twins started crying again. Those wails were the only thing that could stop her footsteps towards embracing freedom. That was the hardest decision in her life, harder than running away from her parents.

She could see Jamal tilting his head. No, she couldn’t trust her monstrous husband to take care of them. She had to be there for them or come back for them. They were the reason for her existence.
Just then Wasim returned with a bottle of local ethyl in his hand.
“Where are you going? Why is the bloody door open?”
“I was… I was just looking…”
Before she could complete a loud smack plonked her onto the floor and she became a slave to the barbarian all over again.